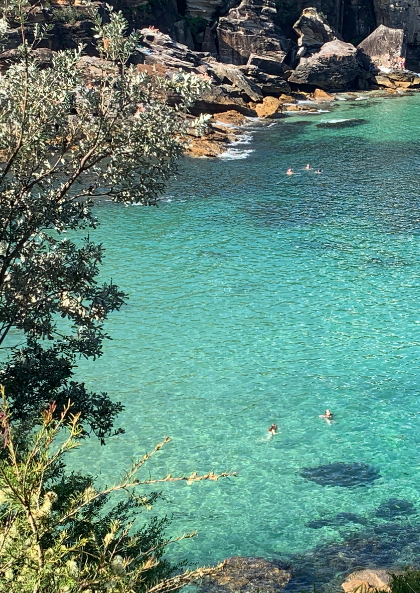 For those who want to a less travelled path, away from the Bondi to Coogee Walk, we would recommend shorter 1 hour walks like Coogee to Clovelly via Gordon's Bay, Watsons Bay to Bondi via Diamond Bay Reserve, and a staff favourite Hermitage Foreshore Walk.    The best smaller walks - start nearby to our Potts Point  and Randwick properties for magnificent glimpses of Sydney Harbour as you walk through Australian native trees, unspoilt picnic spots and beautiful calm sandy beaches.
HERMITAGE FORESHORE WALK - SYDNEY HARBOUR'S ROSE BAY TO WATSONS BAY
For those of you not keen to venture into big waves at Bondi or Manly there's plenty of harbour beaches in Sydney where you can get off the beaten track, have a swim or just sit and take a break and watch the ferries go by experiencing many a local Sydney lifestyle.
From Potts Point or Randwick head to Circular Quay and catch the ferry to Rose Bay.  (or bus it from William Street, near the Coca Cola sign. Walk around the bay, halfway up the infamous "heartbreak hill" turn down Tivoli Avenue til you get to the Hermitage Foreshore sign and then walk along the harbour - it's an hour's walk to Neilsen Park, beautiful hidden beaches like Queen's beach, Milk Beach (busy on a Sunday with teen parties jumping off the rocks).

For a longer walk you continue around the streets of Vaucluse beach across the foot bridge of Parsley Bay and finally end the day at famous Watson's Bay to enjoy a bucket of prawns and a schooner or a G&T at the famous Watto Bay pub!  Then pop on a ferry back to the city from there.
GORDON'S BAY WALK - FROM COOGEE TO CLOVELLY

Close to our Randwick properties, there's a special place called Gordon's Bay.  Head to Coogee Beach and turn left along the promenade and walk up the hill.  We like to think of it as our little salute to Europe, could be anywhere along the Mediterranean!   Where the water is calm and there's nothing but a couple of tinnies (boats) and some young people sunbaking and jumping off the rocks.  It's beautiful, unspoilt and very quiet during the working week.

Get the ferry to Watsons Bay and walk up to the infamous Gap.  The Gap has thousands of year's history from the the Birrabirragal Aboriginal clan through European settlement, shipwrecks, lighthouse trails, from horror stories of suicide to the angel who saved hundreds of people, to now one of the most instagrammable locations in Sydney.
You can walk all along the cliff tops til you see Bondi Beach below, but one of the most beautiful iconic stops is Diamond Bay Reserve. Diamond Bay, known on Instagram as one of the best Instagrammable locations in Sydney, but PLEASE don't jump the fences to get that perfect shot - it's SO dangerous when you go off track so easy to fall off - many have and not survived to tell the tale.  The huge beautiful cliff faces and crashing waves can be photographed all along the path.
To really extend yourself there's a newly opened and well signposted 80 km of public walkways skirting around Sydney Harbour from "North Head to South Head and on to Bondi" called the MANLY TO BONDI BEACH WALK