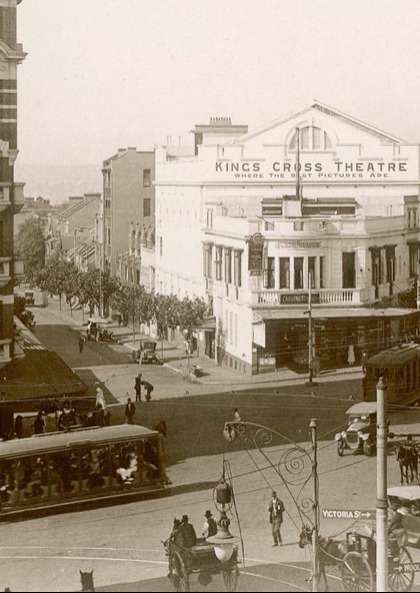 In case you didn't know yet, there's so much more to Potts Point than meets the eye. Placed in the heart of Sydney, the area became a playground for history, with an eclectic mix of creatives, artists, change-makers and even the notorious "Razor gangs" leaving their mark on our local Potts Point streets.

1. Potts Point has been home to many notable figures, celebrities and identities.

Did you know? Many notable figures were either born in Potts Point or lived here at some point in their lives.

David Bowie used to own an apartment in the Kincoppal building in Elizabeth Bay. Not to mention, when The Beatles travelled to Sydney in 1964, they stayed in Potts Point at 40 Macleay Street which was then the Sheraton Hotel.

Also, many notable young artists once lived in the Yellow House, one of the few remaining buildings associated with the Potts Point/Kings Cross artists’ quarter of the Bohemian period lasting from the 1930s to 1970s including George Gittoes, Peter Weir, Jim Sharman and Brett Whiteley.

From musicians to artists to politicians, Potts Point has seen more than its fair share of celebrities.

2. Many heritage-listed buildings are located in Potts Point.

Teeming with charm, Potts Point is filled with heritage-listed buildings and fascinating history.

One such listing is Juanita Nielson’s House at 202 Victoria Street which was built in 1855. Juanita, was the great grand-daugher of prominent Sydney retailer, Mark Foy. Known for her modelling career and 'beehive' wig, she became a popular local journalist, a change-maker, who actively protested urban development in the area through her independent newspaper called “NOW”

Juanita disappeared in 1975 yet her story is deeply connected, and outspoken articles on the 'green-ban movement' were undoubtedly part of the reason why so many heritage homes of Potts Point are still standing today.  Still, no one knows exactly what happened to her as her body was never found. She wasn’t declared dead until 1983, 8 years after she disappeared.

3. Potts Point was once home to the notorious razor gang wars.

You can see why Lawson thought Potts Point needed its “purgatives” when you hear about the area’s gang wars. While 1920s Chicago had the Mob, 1920s Sydney had the Razor Wars. But perhaps most interestingly, some of these gangs and crime syndicates were led by two female rivals, Kate Leigh and Tilly Devine.

Illegally trading alcohol and cocaine, operating as brothel madams, and running gambling schemes out of their homes, these women were each arrested hundreds of times. They both became household names for all the wrong reasons. But even with so much in common, absolutely despised one another.

Potts Point is sprinkled with remnants of its sin city eccentricities and while its notoriety for crime is well and truly in the past, it’s certainly an unforgettable aspect of its unique history.

One of Australia's most famous creatives; story teller, journalist and poet Henry Lawson mentions Potts Point in his poem William Street.  The poem takes us along a very descriptive journey of the local area and was written in his early years when Lawson lived at a boarding house on William Street.

“Tis William Street the highway— Whichever way it be—To business and the theatres, Or empty luxury.
’Tis William Street (the East-end)— The world-wise and exempt—That sells Potts Point its purgatives with something of contempt."

Albeit not in the most flattering way - it is an unforgettable fact that Potts Point is described so favourably by one of our most notable and admired poets!

Read the poem in full here

5. Potts Point was named after the accountant at the Bank of NSW called Joseph Hyde Potts.

Potts Point is named after Joseph Hyde Potts, the very first accountant at the Bank of NSW which is now Westpac. In fact, he was actually their first employee! He purchased the area, originally called Woolloomooloo Hill, in the early 1800s.

Looking for a boutique hotel in Potts Point? We’ve got you covered. Our affordable Potts Point accommodation offers ideal access to this vibrant suburb, all within walking distance to the Sydney CBD.