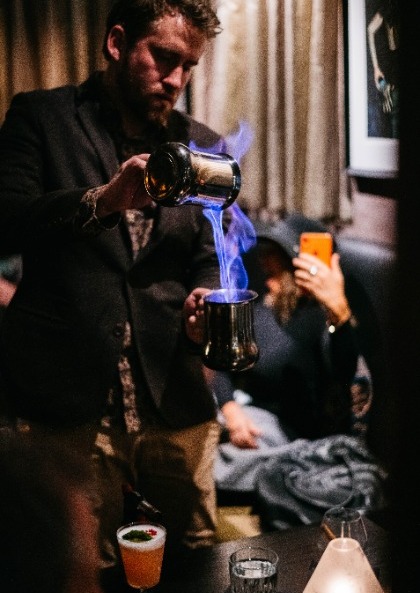 *One of our Stay Local Partners:  Sip Local and Savour Local on Us!

The Roosevelt is a swanky reminder of Potts Point in its element. The architecure is reminiscent of Sydney's famed art deco eras.  It's early patrons were the US army and navy forces, during WWII.  They filled the place with gorgeous servicemen that made lonely Australian girls swoon.  It's more infamous past began when Abe Saffron ran his first nightclub here from the 1950's bringing the glitz and glamour of Vegas to Sydney with international stars like Frank Sinatra and Sammy Davis Jnr performing at the Metro Minerva next door.

The Roosevelt was the place to be seen, where long business lunches were washed down with martinis, cocktail hours were brought in to finish the day and evenings full of wine, women and whiskies. Where creative, perhaps a little illegal, methods benefited Sydney's local underground figures entertainers and politicians alike.

Reopened in 2012, today it plays homage to it's history, but in a much safer manner, stroll along to The Roosevelt on Orwell St, facing the end of Llankelly Place for a pre-dinner drink, stay for dinner or pop in for a post-dinner cocktail.*

Indulge in their smoking cocktail list that is reimagined from it's history ... from the Roosevelt Fizz to the Owl & The Pussycat, an Old Fashioned to a New Fashioned and of course the famous Carlotta a tribute to Les Girls nightclub (the round shaped put - now the Empire), also owned and run by the notorious Abe of the time.

Also a great place for foodies too, with some modern twists on a menu that steps back in time.  Light entrees to share from spicy fries to oysters, grilled prawns and baked camembert to main hearty plates of lamb shanks, burgers, fish to a perfectly cooked steak with all the trimmings and finish off with a Key Lime tart!

During your stay in Potts Point, a must do is our partner's Journey Walk's  Sin City walking tour, a fun way to learn all about this part of Sydney and it's history, including all about Abe Saffron and his venues along the way.  Sydney Lodge guest discounts apply!